Last Video on the Cover Crop

We've had a couple of cold nights, with temps in the low teens (ºF), which has probably killed off most of the growth in the cover crop that I drilled over 3 months ago. This ground had been used to grow an organic food grade hard red spring wheat, which was harvested mid-August. We then disc-ripped the wheat stubble and drilled in a cover crop of radish, turnip, winter pea, sunflower, sorghum sudan and volunteer wheat. The idea is to keep a living root in the ground as long as possible, which ultimately will build up the soil, and at the same time use those roots (and the disc-ripper) to help break up a hard pan/compaction layer that was allowing foxtail to thrive.

I was passing by the group of fields that I filmed for an earlier post and made the following video.

Next spring this ground will have turkey litter spread on it and then planted with organic soybeans.

Update on Cover Crop after the Spring Wheat

The (food grade, organic) wheat was harvested by Aug 19th. We disc ripped the ground to alleviate compaction/hardpan; picked up the large rocks that were pulled up; ran the disc over the big ruts made by the ripper, and drilled in a cover crop of Austrian winter peas, tillage radish, turnip, sunflower, sorghum sudan, as well as the volunteer wheat that was blown out of the combine.

Next year this ground will be in organic soybeans.

One of the shanks on the Ford Model 131 chisel plow hit a big buried rock that the "safety" spring on the row unit couldn't deal with. The result was that the bracket that holds the shank to the toolbar was torn apart. This post shows how I fixed that. 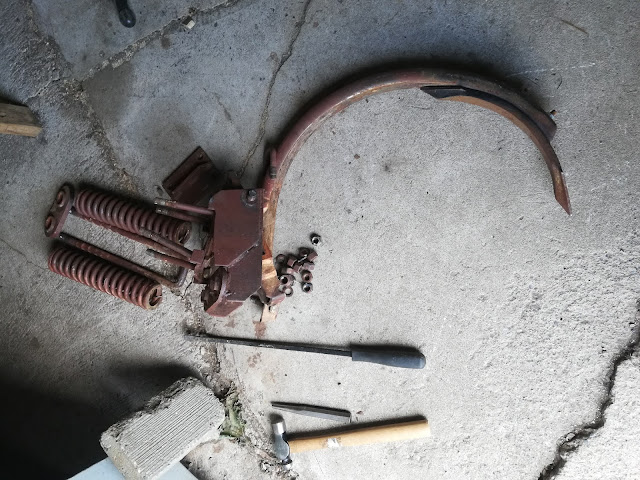 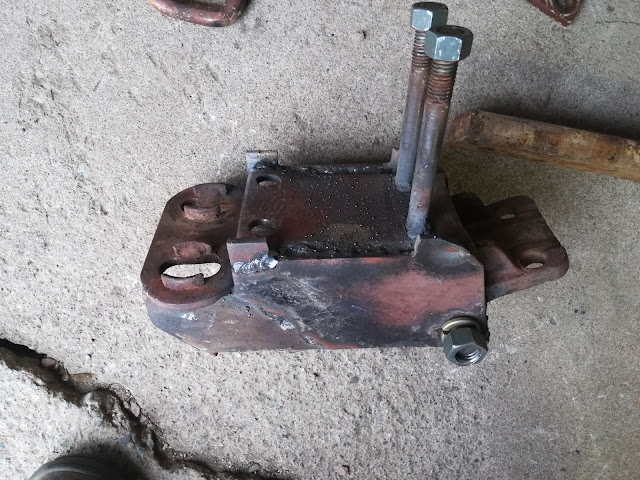 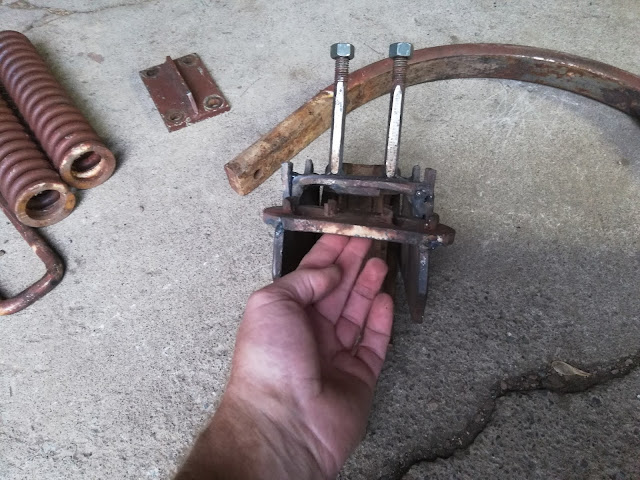 I do repairs like this in my down time. I take a lot of satisfaction from pulling them off; even better is that I can see the results immediately, not like the time frame of planting and harvesting. Its nice to have a balance of the two.

Below is the first of four very short videos showing the repair done to the chisel plow.

The other three can be found here.

This past summer I pressure washed and then sprayed a coating of primer on the plow. Next year I'll spray it with the Ford "blue" paint. The crowd in the cheap seats says it doesn't make it work any better. My reply to that is that it makes me feel better. If I only do things that "work" life is pretty bleak.

There were a few bumps along the way, but it ended well.

Here is a link to the YouTube Playlist I created that has four short video clips of the harvesting process.

I ended up loading out 18.5 semi-loads, each of which could hold a maximum of 63,000 lbs, from the 100 acres of organic corn.  I'm still waiting to get the final figures from the buyer, Cashton Farm Supply, as there are still about 500 bushels (at 56 lbs/bushel, that's about 28,000 lbs) to get loaded off of the combine and grain cart. Once that's delivered in a few days I'll have a better handle on the numbers. At this point I'm comfortable saying the yield was very good, a bit higher than our initial, optimistic, estimates.

The harvesting routine was as follows. I started by filling two trucks which the truckers would take down to Cashton, WI (175 miles one way) at 3am the next day, so they could unload at the mill when that opened at 7am. They would then turn around and drive back to Turtle Lake, arriving around 11am. That same morning I would be combining, filling the grain cart (450 bushels) and combine (375 bushels) so that when the trucks showed up I could dump into the first truck. I'd then combine for about 3 hours to fill up the remaining space in both trucks. Next I'd call the truckers, who would take them down to Cashton, returning to Turtle Lake between 9 and 10pm. Lastly I'd fill up both trucks as I'd done earlier in the day, finishing between 1 and 2am (of the following day). The truckers would show up at 3am to then take both trucks down to Cashton.

We followed that process for 4 days and nights. There were a couple days at the beginning and end to take care of the loose ends. There were also a couple late night combine problems, one which required us to shut down for a day and half until Ronnie, the Deere field mechanic could come out and repair the combine. Fortunately the weather cooperated.

Once I get the remaining corn unloaded I can clean out the combine and grain cart by using compressed air, a leaf blower, and a shop vac. I want to remove as many of the corn kernels as possible to keep the mice from infesting the combine, where they wreck havoc on wiring harnesses, etc. After a thorough cleaning I'll put all the equipment away and shut the big shed doors for the year. It looks like I'll still have some non-miserable weather for the next 5 days so I can get that done.

Next spring this corn ground will be drilled with forage peas that will be harvested in August. Then we will put Kernza, a newly developed perennial wheatgrass, on 25 acres, with the remaining 75 acres getting drilled with winter wheat.

I have ideas on what I can do differently in the coming years. That said it was a very good result.

Harvesting corn has stopped just short of finishing, as the combine isn't working properly. There is a problem with the fuel delivery system. The error codes are showing low pump pressure, high exhaust manifold temperature, and a couple other electrical faults. The Deere field mechanic is going to meet me out in the field this afternoon and I hope he can get things fixed. Other than this, the harvest has gone well. I'll write more about it when its all wrapped up, which I'm hoping will be in a day or two.

In the meantime, I thought I'd put this up on the site. The DMI 730B disc-ripper I just bought is used to break up a hardpan/compaction layer that is present in most of our fields. I expect to use it on about 100 acres per year. The catch is that it takes a bigger tractor (with more horsepower) than the 200 hp CaseIH 7140 that I normally use to do tillage. I've worked out an arrangement with a neighbor where he'll pull the implement with his ~350 hp tractor, using an disc-ripper that I'd buy. In return he'll be able to use it on a certain amount of his own acres.

Corn is Still Too Wet

I hand shelled several ears and took representative samples of corn from two different parts of the fields to the local grain elevator to get tested for moisture. In the last post I talked about the first test we'd done; that was 11 days ago and showed 25.4% moisture.  The most recent test is showing an average of 23.8%, still too high. I'd like to see it below 20% before we start combining. The real determining factor is the weather - if it looks like the rain/snow is coming I need to get the corn off no matter the moisture level. I think I'll need 3-4 days of decent weather to get it all combined and trucked to the elevator in Cashton, WI.

I'll then have to pay the grain elevator to dry it down to ~15%. The cost is approximately $0.05/bushel per point of moisture - so to go from 20% down to 15% will cost about $0.25/bushel. I also pay to have the excess moisture in the corn trucked to the mill. I pay trucking by weight, whether its water or corn.

I got everything all lined up to start combining tomorrow, only to find out that I'm going to have to wait another 4-5 days to start, weather depending. It's a little frustrating. I've been lucky with the weather so far this year, the forecast for the next 10 days looks good as well. Fingers crossed.

We're working on being able to dry corn here on the farm. At a minimum we'll have a new bin built, hopefully by next summer. I think it's going to be important to be able to dry corn, given the very small window I have to harvest as well as a shrinking number of buyers who can take "wet" corn.

There's a very interesting new product/design call Dri-Stack by Haber Technologies that looks promising. Dad is talking to them now to see if it would be a good fit for the farm.

They don't have many videos on YouTube, though they've got a Tik Tok page full of short clips, where I found this -

With all the repairs on the header and combine finally finished and the corn drying down, we decided to do a test run. Aside from verifying that all the new parts and repairs were meshing properly, it was a chance to set the combine up to give a clean grain sample as well as making sure it was completely chopping up the stalks and leaves.

Once I had some shelled corn I took it to the local elevator where they tested it for moisture - its at 25.4%.  While the buyer, a feed mill, will use propane to dry it down to about 15% so they can use it and without spoiling, I end up paying for that drying at least two ways: the mill charges me a fee, per point of moisture removed, to get it down to 15%,  and also as extra trucking to ship all that excess water down to Cashton Farm Specialties (the buyer).  A good explanation of those costs and risks is here.

I'd like to have the moisture be under 20% before we start combining. That will probably take about a week of decent weather so the wind and sun can dry it down; the forecast calls for a few days of rain in the next 10 days so we'll have to wait and see. Hopefully the rain/snow will hold off for a while.

This organic corn is going to be used as animal feed. In the future we might grow for the "food grade" market, like we did with the wheat, however selling into the food market is a bit more complicated. It would require me to be able to dry the grain myself, and then store it in a dedicated grain bin after drying. The costs of building that infrastructure are fairly high, especially considering that I can sell "wet" feed corn with a minimal cost/loss of revenue. 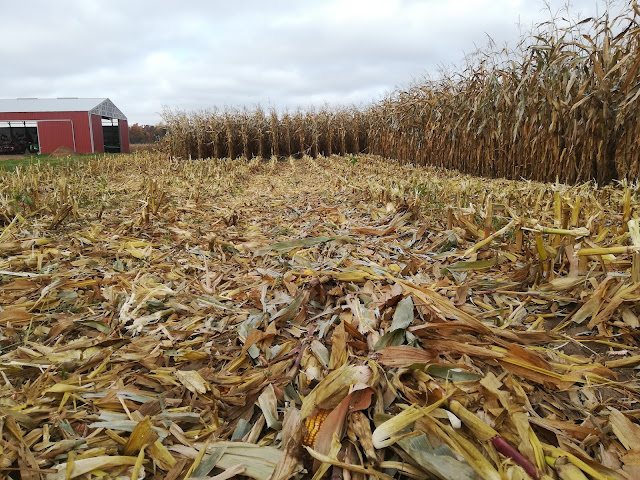 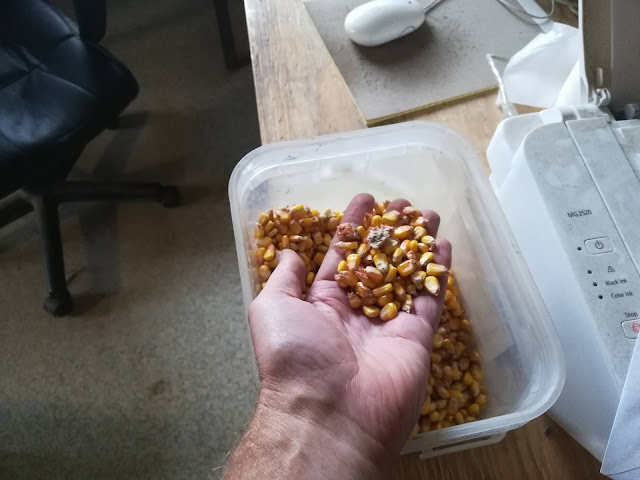 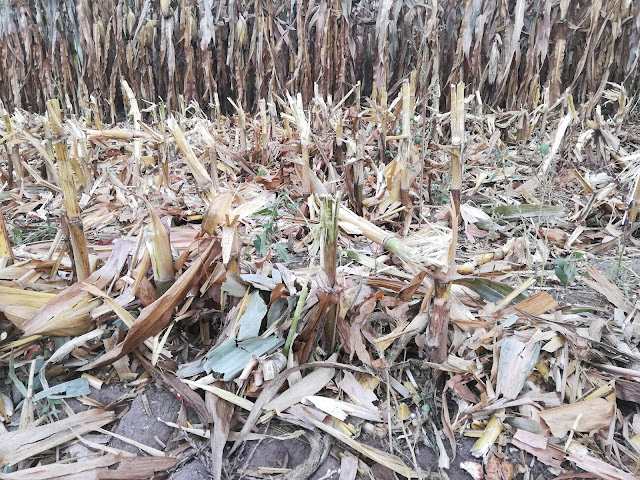 What I've grown can be eaten by people, it just takes some work.