Putting Siding on the Farmhouse - Videos

I started a couple months ago, putting in windows and attaching rigid insulation to the exterior  of the exposed parts of the foundation.  If the weather holds up I should be able to finish going around the entire first floor this fall.

The "ladybugs" in the video below aren't native to the US. The are known as the Asian Ladybeetle, and while more a nuisance than anything else, can make it unpleasant to be outside when they're swarming. This usually happens in mid Autumn, on warmish days. The bugs also have a sharp little bite, and unhelpfully, sound just like a wasp (which also come out on warm autumn days) when they buzz by your head.

This species became established in North America as the result of introductions into the United States in an attempt to control the spread of aphids. In the last three decades, this insect has spread throughout the US and Canada, and has been a prominent factor in controlling aphid populations. The first introductions into the US took place as far back as 1916. The species repeatedly failed to establish in the wild after successfully controlling aphid populations, but an established population of beetles was observed in the wild near New Orleans, Louisiana, in about 1988. In the following years, it quickly spread to other states, being occasionally observed in the Midwest within five to seven years and becoming common in the region by about 2000. The species was also established in the Northwest by 1991, and the Northeast by 1994, aided by additional introductions from the native range, rather than just reaching there from the Southeast. Reportedly, it has heavily fed on soybean aphids (which recently appeared in the US after coming from China), supposedly saving farmers vast sums of money in 2001.


In the above video, I think the damage was caused by carpenter ants. The two old windows on the second floor leaked (and will ultimately be replaced), letting water into the house framing.

It’s consistent with the other damage I found in the house. Any place there was water infiltration, to where the wood would be soaked repeatedly, there were tunnels. As far as leaving the damaged wood in place -- long as you stop the water from coming in and replace the rotted wood everything should be ok. I didn't see any live ants or their eggs. 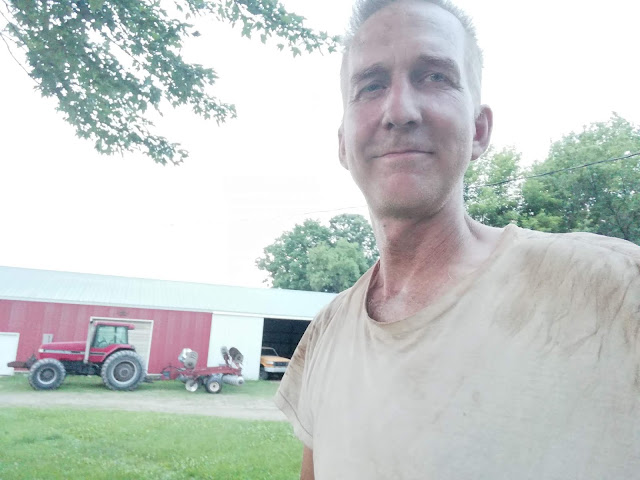 I had just spent a long day row cultivating corn using our 55 year old Deere 4020 tractor (seen in the header of this blog, driven by my dad.) I remember feeling beat up -- and proud, since I'd never cultivated before and it had taken quite a bit of work just to get the old implement moving.  It was also hot, something that seems like a distant memory now, when temps have barely made it above 40º for the past three weeks.
Posted by Bruce F at 4:59 PM No comments:

My certifying agency is MOSA.  It's taken three years, but the first 61 acres is certified. All in all, a fairly smooth process.  To give you some idea of what's involved, I have a notebook detailing every bit of work I've done on that parcel for the past three years. An independent inspector needed to see all the receipts for the inputs used on the land, which she looked at during a six hour on farm inspection.  I paid about $1100 for this.

This certification is important for the farm, as the only way to sell an "organic" product to another (certified) organic producer is to have your product officially certified.  In our case this means that with every semi-truckload of organic grain that we sell, and it looks like there will be about nine full loads coming off this 61 acres, we need to provide the buyer with our Certification Number. This, in turn, allows for an auditable trail, enabling every input for a certified organic product to be verified as following organic practices in its production.

"My Partner in Organic Success"


The rapidly growing organic market is a great opportunity for farmers, food processors, handlers, restaurants, and food retailers. Consumers are demanding, and are willing to pay a premium for, food and fiber produced in accordance with the USDA National Organic Standards. To access this market, you will need a knowledgeable and professional certification partner. As a USDA accredited certification agency with over 17 years of experience, MOSA is ready to serve your needs. 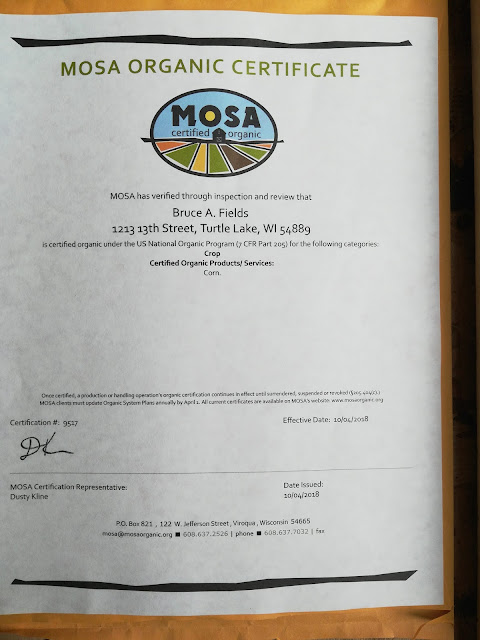 Next year, based on our experience we're going to transition another 110 acres, spread across 3 different fields.
Posted by Bruce F at 7:35 AM No comments: