Carl loves to chase critters. There are a bunch of little red squirrels here, sooo...


Part way through the video my camera operator lost the plot. While making my way over to the tree I forgot what I was doing.

The way Carl has caught the squirrel before is either the squirrel tries to make a break for it and Carl catches him before he can reach safety or I walk over to the tree and “flush” the squirrel, forcing it to chose between me or the dog, which is what I did in the video.

That plastic nailed on the tree was to keep squirrels from using the tree to climb up onto the roof of the house.  The tree was about 2 feet from the house and needed to come down.  I hired a tree service to do it, and $1150 later, the branches were gone and the trunk was in pieces on the ground.

My dad was here to stack the pieces up. Anything bigger than 8" in diameter will eventually get split. All of it will be used to heat the house after a year or two of seasoning/drying out. 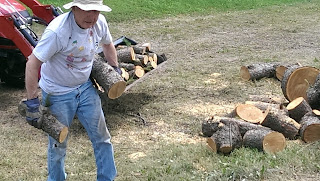 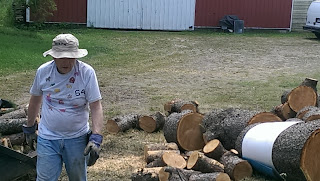 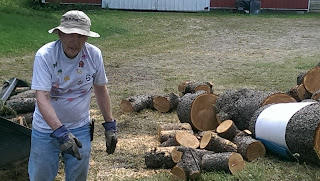 I took a video of him a few seconds after taking the pics above, but it didn't make it onto my phone.
Posted by Bruce F at 9:06 PM