The fall weather has been wet, delaying everyone's plans. We needed to harvest about 62 acres of (conventional) soybeans so Dad hired our neighbor to do the "custom" (meaning for hire) combining. We used our grain cart, needed to temporarily hold beans from the combine while our orange C60 grain truck was making a run to the grain elevator (where the grain is stored for future sale.) 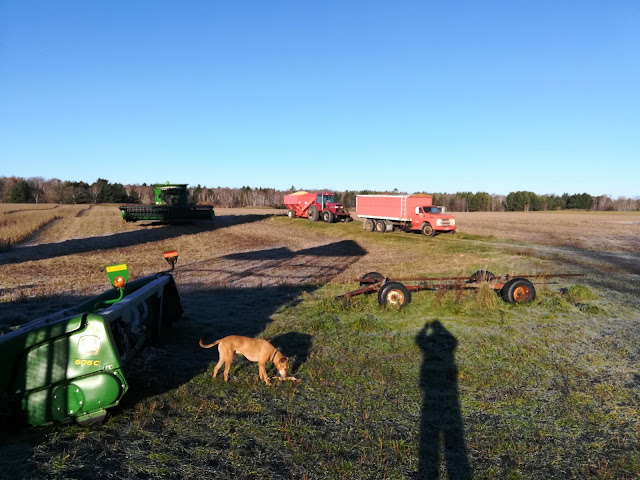 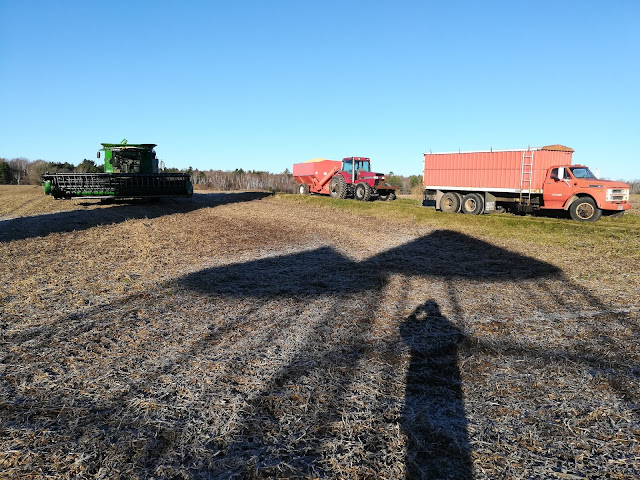 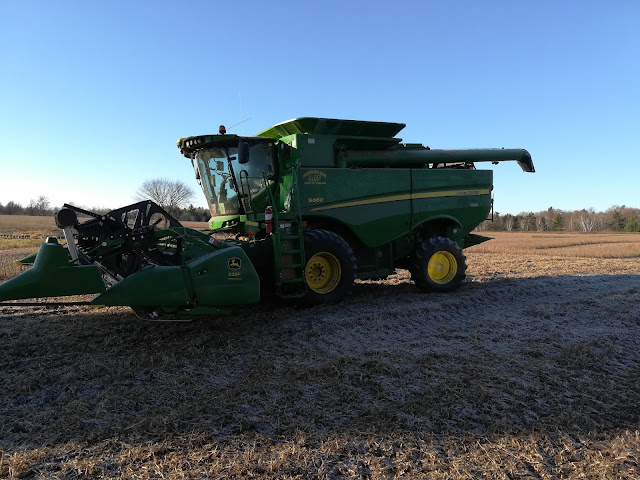 Given that all the farmers in the area are harvesting beans, and bringing them to the elevator, there's a wait to unload grain from the truck, usually about an hour. On the 62 acres we averaged about 45 bushels/acre, about 20% below normal. It was a cold wet (poor) year for growing.

Most of our equipment is old. For example our old combine is a 1981 6620 Deere.  A workhorse, but almost 40 years old. In a combine, with all it's moving parts, that's not good (See this for how a combine works). Even with constant maintenance, it would breakdown every year, seemingly at the worst times. We're selling it and going to have the "custom" guy bring his much newer Deere S660 to do our combining from now on. The grain cart and 7140 tractor are old, but should be able to function properly.

Just a quick note on that. When full of grain, the cart is emptied into a grain truck (the orange truck pictured above) via an augur. That augur is powered by a spinning shaft driven by the power take off (PTO) from the back of the tractor. Well, the shaft was bent, something I only found out after the cart was loaded and I tried to use the augur. I ran the shaft at a very slow speed so the run-out wouldn't tear out the cart's gearbox. Ok, fine. But, when it came time to stop the flow of grain, the shut off gate wouldn't fully close. So grain was spilling out of the top of the truck. If I shut off the pto the cart's augur would still be full of grain and so when I would start it up again I could potentially snap the pto shaft. (You're supposed to start the augur empty, with no load on it.)  It was a kind of Buster Keaton comedy. Just me and the equipment, early in the morning in the middle of nowhere.

This kind of stuff happens several times a day, every day. It's "normal" now. Most people have no idea what happens on a farm.  I'm proud that, most of the time, I can figure out how to get things resolved.

I ended up dribbling most of the grain out into the truck. But I had to shut off the pto with about 20 bushels of grain (for reference there are 8 gallons to a bushel) still in the cart. It took me the rest of the day to clean out the grain from the cart.  Now the cart is being repaired. I'll need it to harvest corn next week.
Posted by Bruce F at 7:19 AM