Below is the seed invoice for the corn and wheat that we're growing this year. Once I figure out what cover crop mix that we'll plant in mid August into the wheat stubble after harvest - probably a mix of the left over sorghum sudan seed I have, plus turnip, radish and winter peas - I'll add that to the order and Albert Lea Seed will ship everything here by mid April, which I think is the earliest we could plant the wheat.

Hard to believe sitting here in the midst of a three week deep freeze (daily temp range is -20º to 0º F), but spring isn't that far off. 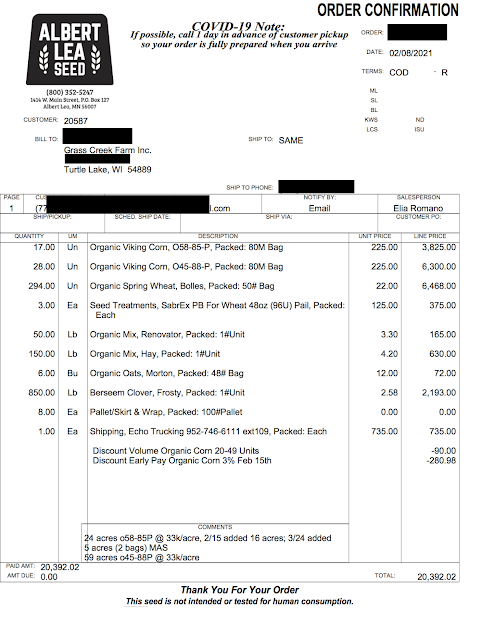 There's approximately 18,000 pounds of seeds (which, if all goes as planned, should yield something like 950,000 lbs of grain) on that invoice.  Occasionally I'm asked why the equipment is so big/expensive. One of the things that's hard to convey is the relative scale of things; even on this "small" farm the numbers get big, fast. To give you an idea of how much we'll produce, there's about 50,000 lbs of grain in a full semi-trailer. So we'll be shipping/trucking almost 20 full semi-loads this year.

In multiyear trials of various wheat varieties, Bolles has shown the highest potential to be sold as "food grade", as opposed to "feed grade". To find out if we've "made the grade", we'll have to harvest it, get it in a bin and then take samples to find out the test weight, protein, falling number, and vomotoxin levels. The price paid for food grade (~$11/bushel) is several dollars above that of feed grade. If we don't make the numbers needed, we'll sell the roughly 3600 bushels into the feed grade market.

To help us make food grade we'll be adding an OMRI/USDA Organic approved treatment, called SabrEx, to the wheat seeds:

SabrEx® for Wheat and Cereals is a formulation of two (2) specific and carefully selected, patented proprietary strains of Trichoderma. The Trichoderma colonizes with the plants’ root system and develops a symbiotic relationship with the plant, feeding off the starches and sugars produced by the plant. In turn, the plant benefits from the Trichoderma as they exude enzymes and proteins for the plants use.

Because the Trichoderma, fungi, found in SabrEx® for Wheat and Cereals work symbiotically with the plant to efficiently utilize moisture and nutrients, the treated crop is able to maintain healthy growth during periods of drought.

The first thing farmers point out when harvesting wheat treated with SabrEx® for Wheat and Cereals is the difference in root mass and fine hairs in comparison to untreated wheat of the same variety. The Trichoderma colonizes in the root system, maximizing the utilization of nutrients. The enzymes and proteins exuded by the Trichoderma result in a larger root system.

One of the most important benefits of SabrEx® for Wheat and Cereals is the increased tillering which ultimately leads to increased yields.

In addition to the 179 acres that will be planted with the seeds listed on the above invoice, we have about 100 acres that is in it's 2nd year of red clover as part of the transition to organic production. This summer the only thing to do on that ground is mow off the growth a couple times (which increases the amount of nitrogen fixed by the clover as well as cutting down weeds before they go to seed) before terminating it with tillage in the fall. In 2022, in keeping with our crop rotations outlined here, the clover ground will be planted with organic corn.

After talking to an experienced producer who suggested I'd get better weed suppression and final yield with a higher rate, I've decided to plant the wheat at 165 lbs/Acre as opposed to the 120 lbs/A that I originally thought. That means another 79 bags of wheat seed. I'm also underseeding the wheat with "Frosty" Berseem Clover. It will continue to grow after the wheat is harvested in August, building organic matter in the soil and fixing nitrogen for 2022's crop of organic soybeans. I also will be planting another 21 acres of organic corn on the new rented ground. I'll be reseeding the hilly hay parts of that rented ground with about 35 lbs/A of grass seed, 200 lbs total.

The changes throw off some of the numbers I gave for total acres on the farm, etc. The latest count is 89 acres of organic wheat, 104 acres of organic corn, 102 acres of transitional clover and 8 acres of reseeded grass hay.