The neighbor to the north of us offered us the chance to rent about 28 acres that's been in their family for generations. There's about 15 acres of "tillable" and 13 acres of hilly "hay" ground. I've been working to get them into organic production.

In short: The tillable is going into corn, the hay will be reseeded and rented out to another neighbor,Rodrigo, who will graze organic sheep.

After having soils tests done, all the acres need fertilizer (turkey litter) and ag lime. 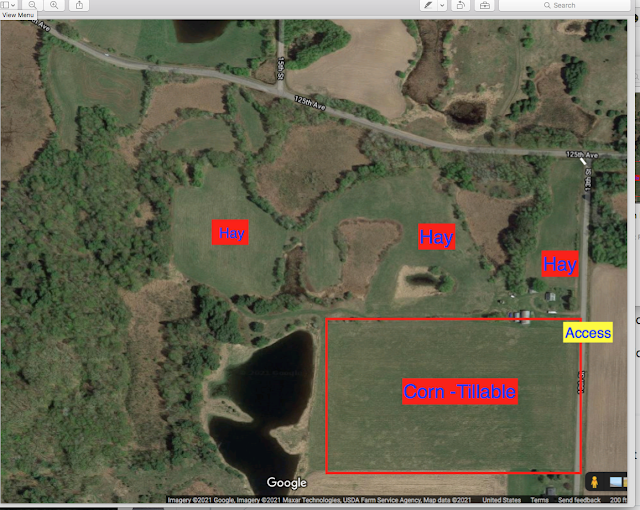 Dad and I used his old 3 bottom plow to plow up about 15 acres of old pasture, labeled "Corn-Tillable" in the picture above. The field is just north of, and contiguous to, land that we own and we'll plant the new, larger "merged" field with organic corn, probably by the end of May.

After plowing, I disked it twice, the first time at a 45º angle, the second at 90º to the original furrows. We're having turkey litter spread on it tomorrow. Right after that we'll incorporate it by making another pass with the disk, as there are still a lot of clumps of sod in the soil. The goal is to get the pieces small enough that I can use my tine weeder and row cultivator without them plugging up.

Side note: I'm occasionally asked about "no-till" ag. There have been a few attempts at organic no-till, though they are very difficult/risky to make work and have primarily been done at the research level. "No-till", as it's commonly practiced is reliant on herbicides (and if needed, pesticides) to kill weeds as well as the cover crops that are grown before and after the cash crop. For me, right now, no-till is incompatible with staying organic. In the meantime I minimize tillage and do my best to keep a living root in the ground, year round.

The "Hay" ground in the picture at the top of this post was reseeded with oats, medium red clover, and Organic Pasture Mix.