The short version, taken from the next to last line in the chart at the bottom of this post, is that we've (Cumberland is the nearest weather station listed) had 26 GDD this year vs. the 10 yr. historical average of 108.

Growing Degree Days - How Does 2022 Measure Up?

After a warm and early start to the 2021 growing season, spring 2022 has felt abnormally cold. The month of April has offered fewer than five days of weather suitable for fieldwork, dashing hopes of an early planting window. Spring tillage in Wisconsin is currently three weeks behind last year and 11 days behind the five-year average, at only 8% complete.

A comparison of growing degree days (GDDs) in the last decade verifies that 2022 accumulations from January 1 to April 27 (using modified base 50°F calculation method) are indeed well below both 10-year averages and 30-year normals. Accumulations for 10 Wisconsin locations from Beloit to Wausau show a departure from normal ranging from 55-120 GDDs, which is equal to 11-23 calendar days at this time of year. Recall that GDDs accumulate slowly in spring when nightly temperatures often fall below freezing. Most of Wisconsin accumulates just 3-6 heat units per day in late April.

As an example, Madison has accumulated only 94 GDDs as of April 27.  The 30-year normal for Madison is 177 GDDs. When the difference of 83 GDDs is converted to calendar days, it equals 17 calendar days (if 5 GDDs accumulate per day). At Madison, only two of the last 10 springs have been colder: 2013 and 2018. The same general trend also applies to the other nine Wisconsin locations listed in the table below.

In summary, current GDDs corroborate the perception that spring 2022 has been chillier than normal.  For much of Wisconsin, it has been the third coldest January-April period in the last decade, behind 2018 and 2013. Growing degree days for 24 Wisconsin locations are provided on the DATCP GDDs page and will be updated each Monday and Thursday through September. 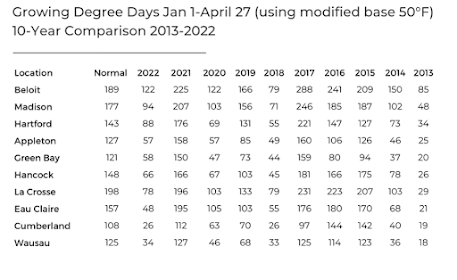