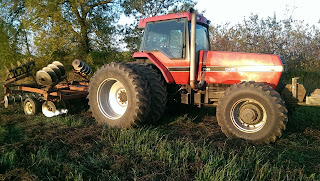 Tilling ground uncovers a lot of rocks, ones that are big enough to do damage to planting and harvesting equipment, so they need to be picked up and dumped at the edge of the field. It's an ongoing problem. There are large piles of rocks all around the border of the field, put there in previous years, decades. I think the land was first tilled in the late 1800's, so there are probably piles dating back that far.

Because I was tired of lugging rocks up the steps of the tractor and putting rocks in the cab, then finding the cab floor full before I could get to the end of the row to dump them, I decided to make a "rock box". I found a picture online of one that another farmer had made and using his basic idea put one together from steel angle and plate. The task was complicated by the fact that there are cast iron weights, 600 lbs, already attached to the front of the tractor.  (Keeping the front end down when doing heavy tillage is an issue with tractors.) The welded unit I made is bolted to the tractor, in two relatively manageable pieces, so it can be removed when its not needed. 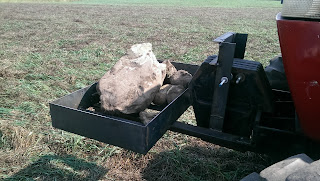 By running the disk over this field I'm hoping to do several things. One is to hasten the breakdown of the clover and oat material/residue. The disk chops, and to a certain degree buries, the material. I'll still have to do some tillage next spring as I need a relatively smooth seed bed to let me row cultivate next spring after I plant. Too much residue will plug up the row cultivator.

Another goal is to get as many existing seeds to germinate this fall, causing there to be fewer seeds in the soil longer term to interfere with the crops I want to grow. Any time you disturb the soil you'll get dormant seeds to sprout, something that is never going to change in an organic row cropping system.

No till is an intriguing option, but its next to impossible to do in an organic system. No till relies on herbicide, instead of mechanical tillage, to control weeds. Soil is conserved at the cost of a higher chemical footprint.

After I see my videos I usually want to edit them for some reason or another. It seems I'm always pressed for time, and don't have much interest in learning how to use the software, to make changes to them. In the video above I noticed that I said the noise coming off of the disk was due to hitting buried rocks. That's only partially true; the linkages in the disk are loose, and the hitch pin rattles as well.  But trust me, plenty of the sounds are rocks.

As far as other corrections I'll refer you to our customer service department.