Cover Crop After the Wheat: How Does it Look?

After combining the hard red spring wheat in mid-August we drilled in a cover crop of daikon radish, purple top turnips, winter peas, sorghum sudan, wheat, and sunflowers. In addition there were a lot of viable seeds blown out the back of the combine.

When I drilled the wheat in the spring I also underseeded it with "Frosty" berseem clover, with the idea that the clover would grow under the wheat and then take off once the wheat was harvested. The clover would be my cover crop, smothering weeds, fixing nitrogen, and be winter killed, saving tillage ahead of next years soybeans. Unfortunately the weather didn't cooperate. We got a little bit of moisture right after the wheat and clover were drilled, enough to germinate the clover which was essentially dropped onto and then pressed into the soil. We didn't get any rain for about 3 weeks and so most of the clover died out, allowing the preexisting foxtail to take over. The wheat was drilled about 1.5" deep, into moisture, so it grew well without any more rain.

That led me to drill in a cover crop as detailed above.

We have a lot of compaction on these particular fields. The turnip and radish in the cover crop will put down a large tap root which should help to break the hard pan up.  With the same goal in mind we hired a neighbor to disc-rip the ground about 24" deep. We're hoping that both of these things will help break up the hard pan, a problem that leads to a lot of foxtail, which likes "wet" compacted soils.

It looks ok; while it's growing nicely, and should continue to do so well beyond the first hard frost, the stand is really uneven. I have some ideas on why that is -

The grain drill isn't meant to put in a low seeding rate through the main box without putting in half speed gears. With these gears the drive shaft turns at half its regular speed, this lets you double the width of the seed cups, allowing for better seed flow through the drill. I bought a set, used, but turns out they were for a slightly different serial number. By the time I got the right part there wasn't enough time to spend on making a tool that would let me install the gears.

Short version - tough to put a small amount of differently sized seeds through a small slit. End result - ok. Next time will be better. 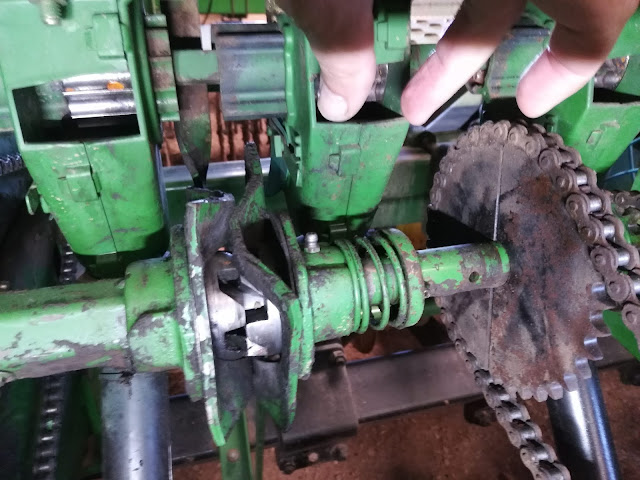 The more I think about it I'm pretty sure the air hammer will do the trick. It won't get worked on until next spring, something to look forward to I guess.