With all of the organic wheat delivered to Ardent Mills, in Mankato, MN, I have enough information to recap our first year growing food grade organic wheat.

One of the questions we had in early spring is where, assuming we could meet the buyer's specifications, we could sell the wheat. After making some phone calls I found several interested buyers. They all said that as a first step I needed to get the wheat harvested and in a grain bin with a fan blowing on it. Once it had dried down I sent out three pound samples to prospective buyers. I also sent a sample to Illinois Crop Improvement, who I paid to conduct "independent" tests: test weight, moisture, vomitoxin levels, protein, and falling number.

The numbers on the tests looked good, exceeding the minimum of 14% protein, a test weight of more than 59 lbs/bushel, less than 1 ppm (part per million) of vomitoxin, and a falling number higher than 250 seconds. Had any of the numbers been below the standard, the wheat would have been sold as animal feed, which brings a much lower price. 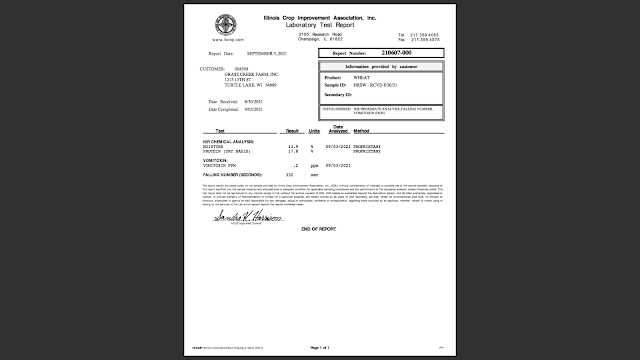 I agreed on a price with Ardent Mills based on the the sample I sent to them. We harvested the wheat on August 14-16th. After it was trucked to a bin, I ran the fan in the grain bin for about 4 weeks, drying the wheat down to 12.5%. I hired a trucker to take the three loads, a total of 160,000 lbs, or 2600 bushels, to the mill in Mankato, MN.

After the wheat was harvested we disc-ripped the ground to break up a foxtail inducing hard pan layer, pulling up a lot of big rocks. 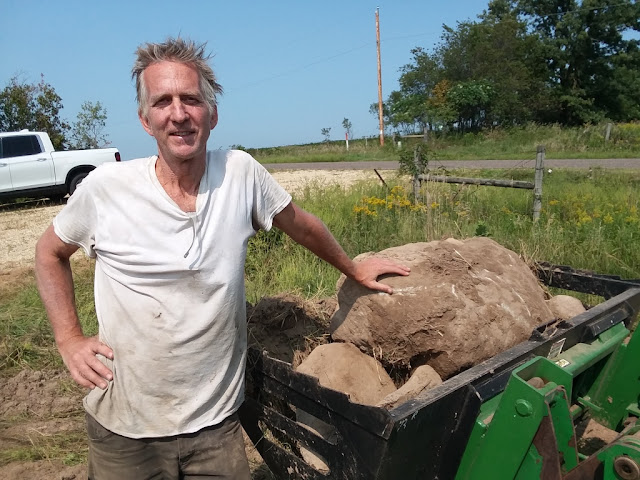 Following that I drilled in a cover crop of radish, turnip, and winter peas. Next year the wheat ground will be in soybeans.

It was a successful first year growing wheat. I've only skimmed the surface in this recap - lots of invaluable experience that stays with me for now, as I'm unwilling to put the effort into writing it all down.